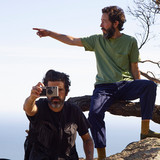 Devendra Banhart and Noah Georgeson set out to make a record like nothing they’ve made before — an ambient album that would be both a haven from a suddenly terrified world and a heartfelt musical dialogue between two artists who have been friends and collaborators for over two decades. Refuge is an album of profound meditative beauty which offers the listener a much-needed sense of peace and renewal. While it was recorded in 2020, its roots go back to the shared sounds and ethics of their childhoods. Devendra grew up in Venezuela while Noah is a native of Nevada City, California. As they got to know each other, they realized they had a similar history in the New Age subculture of the 80s: a world of meditation, Eastern music, the Bhagavad Gita and The Whole Earth Catalog. Childhood memories were colored by the aromas of health food stores and the sound of labels like Windham Hill Records. Noah, whose credits include Joanna Newsom and the Strokes, also co-produced Devendra’s 2005 album Cripple Crow. 2020 created an emotional craving for music with this contemplative, therapeutic quality. Inspired by both memories of the past and the needs of the present, Refuge is an act of companionship and generosity which gives the listener room to breathe. “We’re hoping to create a sense of comfort and coming back to the moment,” Devendra says. “It’s really important to have a little bit of space between us and our anxieties and impulses. What you do with that space is up to you.”