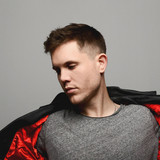 Trent Harmon is a musician with a soulful vocal delivery who surfaced in 2016 as a contestant on the 15th season of TV singing competition American Idol, where he earned a first-place finish. A native of Amory, Mississippi, he grew up singing in church from a young age, and went on to participate in musical theater in high school and as a student at the University of Arkansas at Monticello. Along the way, he learned to play the piano, guitar, and drums. Harmon was working at his family's restaurant in his hometown when a friend talked him into auditioning for another talent show, The Voice, in 2014. He made it through a New Orleans audition and was flown out to compete in Los Angeles, but was eliminated without his audition making it to air. Undeterred, he tried out for American Idol in Little Rock, Arkansas in August 2015, where he surprised the judges with his retro-soul style. The season began airing in January 2016, and Harmon was crowned champion in April. His finale, "Falling," was written partly by show judge Keith Urban and became his first single via his contract prize with Big Machine Records. The country-soul tune hit the Billboard Digital Songs chart, as well as multiple country charts. In 2018, Harmon delivered his full-length debut album, You Got 'Em All, which included a remix of "Falling," as well the single "There's a Girl." ~ Marcy Donelson