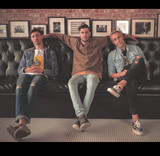 Based out of Freehold, N.J., The Break Plans create melodic, indie pop music you can dance to -- with an alternative rock vibe. Or, “Rock n’ roll with an EDM soul,” as the guys put it.   The Break Plans officially came together when long-term friends and collaborators Mikey Strawz and Phil E. Eichinger finally found their voice -- literally -- in the form of lead singer Colton Braun. It was all set up in the traditional way: through a Craig's List ad.   Over the next several months, Braun (vocals and keyboard) and Strawz (guitar and bass guitar) began recording original tracks in the vein of Walk The Moon, Coldplay, The Killers and Lovelytheband.