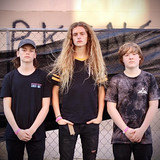 You know your mama told you “don't judge a book by its cover,” right? That definitely applies to Brotality. Though the majority of the band isn't even old enough to vote, the guys in Brotality – brothers Bryce Maopolski (18, guitar and vocals) and Reece Maopolski (17, bass and vocals), along with Liam Fenton (15, drums) – have created a band that unapologetically takes its sonic cues straight from the founding fathers of metal. With tight songwriting, muscular vocals, and crushing riffs in abundance, Brotality have created a dynamic force worthy of carrying forward the Heavy Metal moniker. They cite Mastodon and Megadeth as influences, and it won't take long for anyone who listens to their music to be smacked in the face with an undeniable old-school sensibility.