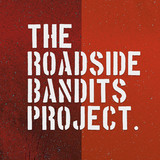 The Roadside Bandits Project is the brainchild of London based producer Santi Arribas whose career in music production and mixing spans over two decades. His creative influences include classic guitarists like Stevie Ray Vaughan, Robert Johnson, Ry Cooder and BB King, as well as the blues and psychedelia genres as a whole. The eponymous debut album is out now on Dharma Records, featuring collaborations from singers Nell Bryden and John Sterry plus a whole host of top-end musicians, including members of Gang of Four and Jamiroquai.