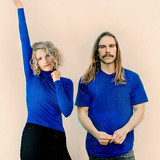 There is an uncanny futurism beating inside darkDARK, the duo of Chris James and Genevieve Vincent that pairs cinematic synths with modern pop. You feel this in the tidal push-and-pull of their latest EP We forget when we’re apart. and their forthcoming debut album (via Nettwerk Records). Genevieve (darkDARK’s co-songwriter, co-producer, and main vocalist) is a classically trained composer/producer and former music supervisor who has scored films (The Broken Heart Gallery, Moving Art, Now Is The Time) and written orchestral concert music. Meanwhile, Chris (co-songwriter, co-producer, and additional vocalist) is a go-to composer, mixer, and sound designer who’s worked on spots for the Nike, Google, Levi’s, and Audi. With the duo’s debut EP Heathered, outlets like NOISEY and NPR’s All Songs Considered were quick to compliment, with the latter praising the duo for crafting “infectious” tracks that “leave listeners wishing for more,” and Consequence Of Sound summing it up with “darkDARK have managed to harken all sorts of phases in electronic music’s history in a way that feels wholly original and forward-thinking.” Since then, darkDARK’s music has made its way onto Empire, Power, and The Hate U Give. The secret to their synchronicity lies in their work practice too; with Genevieve in Los Angeles and Chris in Austin, they pass it back and forth sometimes more than a dozen times, adding and subtracting elements until it hits an aural sweet spot.