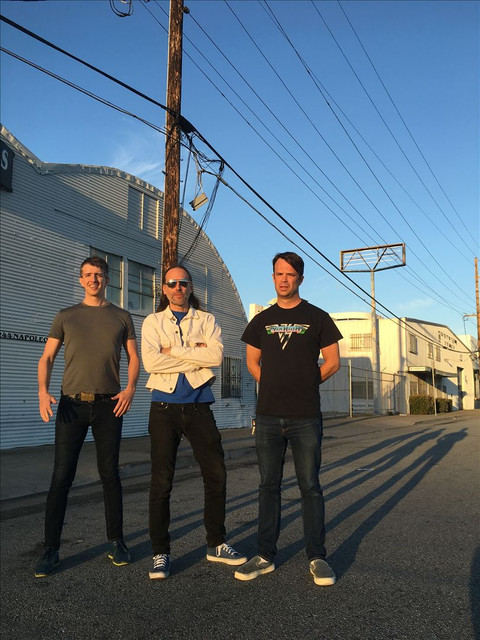 Initially associated with the mid-'90s post-rock scene centered around Tortoise, Ui, Labradford, and the Thrill Jockey, Kranky, UHF, and Southern labels, Trans Am's extreme, somewhat humorous reorientation of the clichés and conventions of rock music, primarily through either technical (exaggerated displays of skill) or instrumental (electronics, effects) deviations continued well into the 2000s and 2010s. Formed in Washington, D.C. in 1990, the group didn't begin seriously recording until 1995, after its members (Phil Manley, Nathan Means, and Sebastian Thomson) finished college. Their self-titled debut, on the Chicago-based Thrill Jockey label, was recorded after just a few rehearsals back together, and contained instrumental, largely improvised versions of simple rock-oriented figures based loosely (and, again, quite humorously) on '70s and '80s popular and progressive bands such as Boston, Bachman-Turner Overdrive, and Yes. Produced by Tortoise's John McEntire at Chicago's Idful Studios, the album was instantly (if somewhat ironically) lauded as an example of post-rock (an association that proves the meaningless of the genre and Trans Am's own relation to it), in turn leading to a short live tour as Tortoise's opening act. The group returned in the fall of 1996 with a self-titled EP of somewhat retro electro-funk experiments (released by Happy Go Lucky) that brought to the fore an affection for electronics previously reserved either for between-time studio distraction or the brief interludes separating the meatier segments of their debut. With 1997's Surrender to the Night, however, Trans Am expanded that approach to album length, with tributes to Kraftwerk, Hashim, Can, and New Order dominating and only a few recognizably "rock" songs included. Also signaling a change in focus was the expanded role electronics would play in their live performances; where earlier incarnations of the group included noodly Casio interludes that never grew beyond a sideshow, Surrender's more electronics-heavy material meant more of the stage space was given over to analog machines, trigger devices, and MIDI-wired beatboxes. Trans Am's inclusion on the Mille Plateaux label's double-CD compilation In Memoriam Gilles Deleuze (alongside Cristian Vogel, Beequeen, Mike Ink, and Atom Heart, as well as labelmates Rome and Oval) also helped introduce the band to audiences in Europe, where the group found similar popularity as such electronic/acoustic hybrids as Flying Saucer Attack and Stereolab. A fourth album, Futureworld, followed in 1999, and a year later the group returned with its most expansive album yet, The Red Line, recorded in the band's own National Recording Studio. In 2002, Trans Am released T.A. -- another foray into late-'80s and early-'90s electro-rock. The ironic, political Liberation followed in early 2004; after the album's release, the members of Trans Am scattered across the globe on a planned, two-year hiatus. Means ended up in Auckland, New Zealand, and the bandmembers convened there to begin sessions for their next album at MAINZ, a local recording school. After completing the album at Brooklyn's Okropolis studio, the results, Sex Change, were released in early 2007. A live album, What Day Is It Tonight?, appeared in 2009. The enigmatically named album Thing was issued in spring 2010. During the next four years, the group worked on their tenth album in between the members' other commitments, which included Manley's work with Life Coach and Thomson's work with Baroness. Volume X arrived in 2014. The band returned in 2017 with the vinyl-only album California Hotel, a set of songs inspired by My Bloody Valentine, David Gilmour, John Carpenter and Sade that was a Record Store Day release. ~ Sean Cooper, Rovi