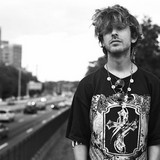 Coming up in the late-2000s noise scene of Montreal, electronic producer Airick Woodhead began his solo project Doldrums in 2010. Melding different aspects of electronic sequencing and noisy sample-based sounds with hypnotic pop structures, Doldrums quickly emerged in a series of random tracks, 7" singles, remixes, and even a VHS collection of videos. In 2011 Portishead was so moved by Doldrums' cover version of their song "Chase the Tear" that they included his version as the B-side of a single release of their original version. His growing profile resulted in the release of a debut EP, Empire Sound, that same year, followed by the Egypt 12" in 2012. Through this time, Doldrums was touring extensively in a three-person stage version of the band, playing shows with contemporaries like Grimes and Purity Ring. A debut full-length, Lesser Evil, materialized in early 2013, gathering together the best of Doldrums' scattershot sounds into the project's most cohesive expression yet. Extensive touring followed, and on some levels, Woodhead's experiences traversing the U.S. inspired the work that would become his next album. Borrowing its title from a Henry Miller book of the same name, 2015's The Air Conditioned Nightmare reflected lyrically on time spent in the more surreal parts of America, while musically the project began drawing more from deeper electronic influences. ~ Fred Thomas, Rovi