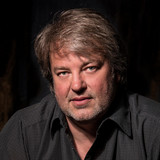 Although he identifies as a new age artist, Mars Lasar has also had a discreet impact on the development of electronic music at large, and he has worked on platinum recordings within other genres. Born in Germany and raised in Australia, the Los Angeles-based keyboardist and composer combined formal classical music training and technology, which lead to pioneering the sequencing and sampling concept. For 8 years in the 80's, Mars was employed by Fairlight Computers to create and demonstrate the first multi-track sequencer "Page R" included in the Fairlight Computer heard on early-'80s recordings by the likes of Stevie Wonder and Peter Gabriel. The multi-track sequencer is now used in 95% of modern music (Logic, Cubase, Performer, Studio One). Lasar's reach took off in the '90s, when he worked on Seal's smash hit "Crazy" and the Jason's Lyric soundtrack "Love Is Still Enough". Both platinum albums. He also co-produced Herbie Hancock's album Dis Is Da Drum. With over 30 solo albums to date 2021, his releases began in 1990 with Olympus, his 2nd The Eleventh Hour reached Billboard's top 10. His many styles include: Electronic, Chill, New Age, Meditation, and conceptual releases like Karma, Valley of the Giants, AfterWorld and Utopia. The 2021 release UltraChill explores "lo-fi" styles, with 17 tracks on the album. Mars' latest 2021 release Coastal Escape which was written during the difficult Covid lockdown period, depicts the epic wilderness of the Pacific Coast. Onward =>