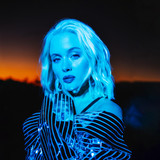 Swedish hitmaking singer/songwriter Zara Larsson crafts R&B- and club-influenced dance pop influenced by artists like Beyonce, Rihanna, and Robyn. After winning a Swedish singing competition at the age of 8, Larsson crashed the mainstream in the mid-2010s with a string of Swedish number ones like "Lush Life" and "Never Forget You," which were certified multi-platinum around the world. Those tracks landed on her 2017 chart-topping breakthrough So Good, a Top Ten hit across Europe and Australasia. Born in the Stockholm suburb of Solna, Larsson first caught the public's eyes and ears in 2008 as the winner of the popular Swedish talent show Talang Sverige (the regional version of Got Talent). Following the success of the show, she inked a deal with Ten Music Group and issued her debut EP, Introducing, which featured the hit single "Uncover" in 2013. The song was certified triple platinum in her home country, and after another EP, Allow Me to Reintroduce Myself, Larsson began work on her official debut long-player. The resulting 1 arrived in 2014 via Record Company Ten and Universal Music. Three additional singles reached the Swedish Top Ten: "She's Not Me," "Carry You Home," and "Rooftop." A pair of 2015 singles proved to be Larsson's international breakthrough. First, the multi-platinum smash hit "Lush Life" reached the Top Ten across Europe, then "Never Forget You" (featuring MNEK) hit the Top Ten in Great Britain and went platinum in the United States. Those tracks would eventually appear on her sophomore LP. Before the release of that album, she collaborated with Tinie Tempah on "Girls Like" and David Guetta for the 2016 UEFA Euro Cup theme "This One's for You." By the time So Good was released in early 2017, four additional singles had been issued, including the Charlie Puth-penned "So Good" with Ty Dolla $ign, "Symphony" with Clean Bandit, and the MNEK-produced "Ain't My Fault." The set debuted atop the charts in Sweden and marked her chart debut across the world, including in the U.S., where it reached the Top 30. The following year, Larsson released the platinum-certified single "Ruin My Life" and entered 2019 with "Don't Worry Bout Me," "All the Time," and "Wow." She also collaborated with K-pop superstars BTS on "A Brand New Day" and provided "Invisible," the theme song for the animated film Klaus. In 2020, Larsson and American rapper Tyga were featured on Kygo's tropical club anthem "Like It Is," which became a Top Five hit in Sweden, New Zealand, and Norway. Later that year, she released "Love Me Land," the first single from her LP of the same name. Love Me Land featured production from Max Martin, Julia Michaels, and Justin Tranter. ~ Neil Z. Yeung & James Christopher Monger, Rovi