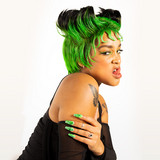 Yeboyah is a Helsinki-based artist, who is currently taking the Finnish music scene by storm. Since her first release, single Broflake in 2017, she has become one of the most acclaimed live acts and artists in Finland. 2019’s Elovena EP earned Yeboyah a nomination at Finnish Grammys. Yeboyah is currently working on her debut album set to be released in 2021. Recent singles “Mitä tarviit” and “Kredi feat. NCO” shot straight to Spotify top50 in Finland and have received airplay in several big radio stations. In addition to her music career Yeboyah is one of the most prominent and visible cultural influencers in Finland. Her work against inequality and injustice has evoked important discussions in Finland regarding systemic racism as well as sexism and racism in Finnish hip hop culture. She is a trailblazer for future artist generations and a true inspiration on the way to a more inclusive, diverse and safe music scene. Recently Finland’s biggest newspaper Helsingin Sanomat picked Yeboyah as the only artist on their “People to follow in 2021” list. With amazing new music, lots of gigs on the horizon and media hype guaranteed, Yeboyah will make sure there is plenty to follow. It’s Yebo Season!