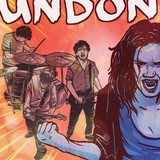 Blert are everywhere and nowhere, but in the current physical plane, reside in Northern California and near Portland, OR. Ron (bass), Neal (drums & voice), and Chris (guitar & voice) met as teenagers in Boston in the late 80’s and started Blert’s musical co-evolution. Later, in the late 90’s they reconnected in San Francisco with enough momentum to gig extensively and begin to focus on recordings. Their current incarnation began in the pandemic world of virtual meetings and projects, meaning that newest Blert member, Tasha (lead vocals) has never met original members Chris or Ron in person. So, technically, current Blert arose from the depths of the internet and resides in the astral. Described as math rock, nerd rock, and alternative planetary proto punk, Blert seeks to transcend typical labels with their evolving sound, while recognizing their roots of rock and punk inspiration (and perhaps a little musical theatre sprinkled in).

The latest album, New Day Undone, volved over 22 years (right on schedule given their long history) and continues to evolve and expand, just like the universe itself. Created from the rage, confusion, excessive time at home, and sometimes even transcendent joy that was 2020, the music was transported from previously created sounds in the 2000’s, whilst lyrics and additional sounds arose recently through collaboration between everyone.