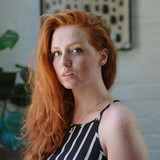 Sophie Longshaw, known for distinctive vocals paired with indie-acoustic soul style tracks, started releasing music in late 2016. Her debut tracks Let's Go To The Beach and In The Morning crashed the site Gigwise upon their release and wrote how well Longshaw "traverses the difficult subject of depression with a poignant poeticism." Cub magazine described her voice as "akin to Birdy’s – deep and earthy, undershot with a piercing self-consciousness. It’s the star of the show." The singer-songwriter was born and raised in Sheffield and now resides in London, UK.