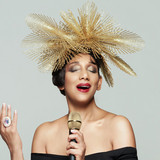 Debbie Sledge is a principal member and vocal director of the group she began with her siblings, the Grammy-nominated Sister Sledge, who hit the top of the charts with worldwide hits such as “We Are Family”, “He’s the Greatest Dancer”, “Lost in the Music”, and “Thinking of You”. These songs made global superstars of the quartet, and today Debbie continues to perform with her daughter Camille Sledge, nephew Thaddeus Sledge and artist Tanya Tiet. In addition to touring with her family,

Debbie has performed worldwide as a jazz artist, exploring loved classics and lesser-known gems close to her heart. Influenced by legendary Artists such as Sarah Vaughan, Nina Simone, Shirley Horn, Billie Holiday, Nancy Wilson, Little Jimmy Scott and many others, who’s unique, free and creative approaches fuelled her journey developing her own vocal style. She released her first solo debut CD in 2014 "Unsung", a mellow collection of classic love songs such as “Fever” and “Besame Mucho”, as well as two of originals by Debbie - “Murky” and