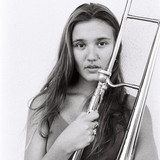 The 21 years old young Catalan trombonist and singer Rita Payés has lived and breathed music since she was a child thanks to her musical family. She studied piano, and later trombone which became her main instrument. She entered the well-known Sant Andreu Jazz Band

under the direction of bassist and tenor player Joan Chamorro, and participated