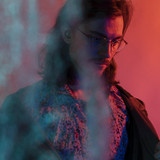 Folk music exploring the poetic dynamics of neuronic streams making and faking the consciousness of the human mind. Dreams of lovers becoming overdosed narcotics, bad thoughts becoming bad behaviours, time being a medium for exposed emotion. Not a thing changed since Plato talked about people being captivated in caves having "supersonic superstitions", being exposed to shadows as Robert and I ran down Tauranga Beach feeling like wet dogs in the cold waves. Nobody will make sense of it except you write a song about it.   Named after Henry H. Lightcap.   "P.S. I'll be coming alone, as you might expect. Just me and my fleas… . I'm alright, it's the world that's dysfunctional and I mean that literally." Edward Abbey: A Fool’s Progress, Chap. 3, p. 69