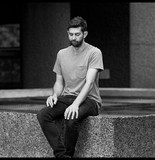 ‘98’ is the 2nd album from composer, producer and cellist, Rob Lewis. His first album ‘Momentum’ was released in 2018 and both albums have received airtime on Radio 6 with support from Mary Anne Hobbs, Tom Ravenscroft, and Tom Robinson.   Rob’s compositions are created in one take using a cello, simple effects and a loop pedal; all manipulated using expression pedals. Loops are kept dynamic by changing the playback direction of the recorded material whilst adding new textures using unique sounds on the cello. Each composition is written with the idea of mixing it completely live, and as a result no track ever sounds the same twice.   As a composer, Rob has worked on a variety of high-profile projects for TV, scoring numerous documentaries, as well as collaborating with SBTRKT, Noel Gallagher and David Holmes. Last summer saw Rob perform his debut album at Kew Gardens newly refurbished Temperate House as part of Cirque Bijou's 'Harmonic'. Rob also performed Momentum at WOMAD Festival.