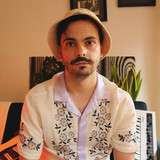 "Over his last few releases, Adam Awad has cemented his sound in an effortless, organic fusion of bluesy, indie psychedelia, a sunny sound that invites you to stew in its warmth. In There's My Girl, he looks to influences of the past, channeling the 60s and 70s in a track that pays tribute to the psychedelic stylings of The Beatles" - Scene Noise "...there’s a certain maturity to Awad’s coming of age contemplation, which mixes classic 1970s Yusuf / Cat Stevens/Paul Simon-esque songwriting with more modern indie quirks and soaring harmonies. Like all good wordsmiths, we can only see Awad’s talents growing in subsequent releases." - Time Out Dubai     Adam Awad is a British-Egyptian singer, producer and multi-instrumentalist currently based in Cairo, Egypt. Beginning his music career in 2012 with home recorded folk ballads, he’s gone on to put out a number of critically acclaimed songs which have garnered coverage from the likes of Rolling Stone Middle East as well as radio play around the world. While his charmingly laid back brand of songwriting has developed over the years, his music has now evolved into a more dreamy and psychedelic brand of folk pop while still staying true to his earnest lyrics and memorable melodies.