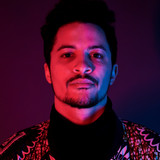 With his solar personality, James Z is switching between rap and singing, with a wide vocal range and an easily recognizable warm tone of voice. His universe is about happiness, with burning lyrics! Musically, he is always on the lookout for new sounds. His compositions mix genres to share a unique pop, which he calls "Urban Groove". To transcribe his art as well as possible, he directs and scripts his music videos himself, supervises his visuals, orchestrates his concerts. His real name is James Zoro, originally from Reunion Island, then moved to the sunny Pyrenees mountains, finally launching his career in the bubbling capital of France, Paris. Since the early age, he was immersed in music by studying guitar and piano. Then comes the discovery of jazz clubs and jam sessions which add a groove anchored to his universe. His music will speak especially to fans of Rilès , Noga Erez , or even Nemir. On his big gigs, he is accompanied by his Cool Band (saxophonist / violinist, chorister and dj) to blaze the moment 🔥