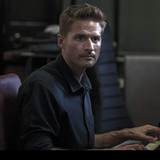 Stefan Olofsson is a Swedish producer and piano player whose music ranges from pop to jazz, classical and progressive rock. He is one half of the yacht rock duo State Cows as well as one third of the crossover prog band Dynamo Bliss. His first solo album Story of a Woman was released in 2003. It combines elements of jazz, classical, progressive rock and Swedish folk music. During the same time period he was a session player on yacht rock projects Strange Ways and Days in L.A. He has performed and recorded with Jay Graydon (two-time Grammy winner, twelve-time Grammy nominee, Steely Dan, Earth, Wind & Fire), Bill Champlin (Chicago), Jason Scheff (Chicago), Michael Landau (Michael Jackson, Pink Floyd) and Ian Bairnson (Kate Bush, Alan Parsons Project) among others. He is currently recording new music with his two bands as well as another solo project. He is also active as a jazz pianist in the Greek city of Chania.