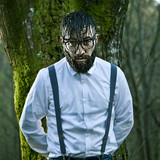 David Granha is a Spain born producer with 20 years of career in the electronic music scene, and a proliﬁc discography in labels such as Filth on Acid, A.R.T.S, Noir Music, Tronic, Suara, Poker Flat, Unrilis, Octopus, KMS, Respekt, Odd Recordings, Codex or Analytic Trail, to name a few. He has reached the top 100 of the most sold techno artists according to the web Beatstats, and the Beatport Techno top 10. Given his strictness, his music has become indispensable for many of the best DJ’s of the world, thus, he has won the support of artists like Laurent Garnier, Richie Hawtin, Enrico Sangiuliano,