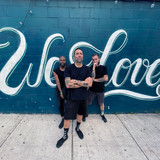 NETHERLANDS rejects restraint in favor of maximum impact: shredding chops, soaring vocals, and maddening hooks. Following Timo Ellis' mission statement of making music that is equally "light-hearted, brutal, and ecstatic," Netherlands crushes decades' worth of bombast into psychotropic nuggets of evil rock bliss. The band's energy is palpable, as anyone who has witnessed their live shows (with the likes of Mutoid Man, Retox, and Melt-Banana) can attest to; the band puts on an absolute onslaught of a performance. David Richman's pounding drums, Kelsey Warren's overwhelming synthbasses, and Ellis' guitar wizardry meld into a wall of crushing noise-rock-by-way-of-tech-sludge. Yet Netherlands' real magic lies in the contrasts it sets up: falsetto vocals, odd time signatures, and haunting hooks transform the raw power into weirdly delicious and dynamic songs. The overall effect is not unlike that of Swans and Dio playing simultaneously, atop an actual mountain of MDMA.