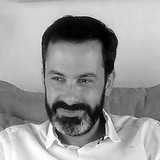 Miguel Lázaro along with Jose Corredera have been producing electronic music under The Lab project since 1993. Their most notable work is Homodigitalis (Remastered Edition) soundtrack of the film by Bernardo Rivavelarde. Among many works and collaborations as composer, producer and musician, in 2018 Miguel starts his solo project. His first EP B.R.A.V.E was a collaboration with La Cris better known for his appearance in La Voz (The Voice) TV show. After his second single Bach Station, together with singer and composer Paula Grande they launch Jump Into The Water. All the albums artwork are made by spanish designer and typographer Miguel Angel Hernández.