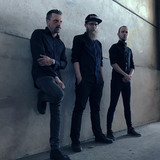 Frankley Everlong released their debut album Songs for the Broken on October 31, 2014. Shortly thereafter, the band’s original bass player left the band, and was immediately replaced by Nicklas Petersson. The band toured throughout Europe in 2015 and in 2016 the band got down to writing material for a new album. In late 2016-2017, the band began tracking these new songs, and by 2018 they finished recording their latest album "Till the Dance Do Us Part". In January of 2018 the band sent the album to several dozen labels seeking a deal, and in the Summer of that year landed one with American indie Eclipse Records (Mushroomhead, Bobaflex, A Breach of Silence). The band’s signature sound is one of pure energizing bounce, while maintaining a pop-punk vibe laden with disco beats. Their latest album Till the Dance Do Us Part contains nine tracks which showcase their unique talent and ability to grab listeners by the ear and mesmerize them with songs that are pure, simple fun. All in all, Till the Dance Do Us Part is a dynamic, impassioned collection of pop-punk songs that will stand the test of time. The album makes a declaration to the world that Frankley Everlong is the new standard by which all pop punk rock will be measured by moving forward. Till the Dance Do Us Part saw a worldwide release on January 18. 2019 via Eclipse Records.