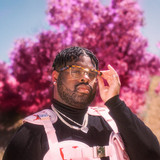 Nicknamed after the attire he became known for wearing in recording studios, Pink Sweat$ is a singer and songwriter who favors R&B ballads consisting of only his voice and guitar. After writing material for other artists, he made his recorded debut in 2018 and has released projects like 2020's The Prelude with the intent of creating a lasting emotional connection with listeners. A native of Philadelphia, David Bowden was musically inclined as a youngster. He learned to play drums and sang regularly. Raised in a religious household, he didn't get into secular music until his late teenage years, and eventually absorbed a wide breadth of genres. He got into the music industry as a demo vocalist and songwriter at Philly's historic Sigma Sound Studios. With no desire to become a recording artist himself, Bowden co-wrote material for the likes of Rosie Bondz, Natalie Imani, Aaron Camper (including the 2016 single "Guns and Roses"), and Tierra Whack (such as the 2017 single "Child Please" and 2018's "Pretty Ugly"). After surviving a severely debilitating three-year fight with a rare esophageal disorder, Bowden felt inspired to start keeping his songs to himself, and signed a digital distribution deal with Human Re Sources. He made his recorded debut as Pink Sweat$ in July 2018 with "Honesty" and "No Replacing You," a pair of heartfelt, unvarnished ballads that sharply contrasted with commercial R&B. Both songs appeared that November on Volume 1, his first EP. The similarly direct and brief Volume 2 arrived the following March. A steady stream of singles appeared over the next two years including the 2020 ballad "17" and the bouncy "Ride with Me." While he was issuing these singles and shorter projects, work was being done towards the release of his official debut studio album, Pink Planet. To satiate fans waiting for the LP's release, Pink Sweat$ offered up The Prelude in July 2020. A collection of select songs from the still-forming album, the EP was preceded by the pleading, passionate single "Not Alright" the previous month. ~ Andy Kellman, Rovi