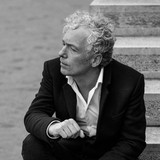 Erik de Jong (Spijkenisse, February 2, 1961) is the mastermind behind Spinvis. Once a student of composition at the conservatory of Amsterdam, De Jong debuted in 2002 with Spinvis, a collection of songs he had composed behind the computer in his attic. The music could be described as lo-fi singer/songwriter/sample music, or as cut up mini film stories disguised as pop songs. De Jong's success story was an unlikely one. He was already in his forties when he debuted as a pop artist. Rumor has it that he had sent out his demo tape to a major label, BMG, and a smaller one, Excelsior, and was rejected by both. Only when a staff member of the latter put on his demo during a company party did the odds begin to turn. Label director Ferry Roosenboom became an enthusiast and signed De Jong, whose self-titled debut album released in 2002 became a massive success, surprising critics, music industry people and De Jong himself. As a teenager De Jong had played a variety of instruments in different bands. Consequently, he played all of the instruments on the Spinvis album himself. When Spinvis became a hit, however, he got together a touring band of top-notch session players (including his father, Walter De Jong, on guitar) and appeared at the Crossing Border Festival. A short string of live shows in the spring of 2003 turned out to be a great success. A few of these live tracks can be heard on Nieuwegein Aan Zee, released in 2003. In 2004, De Jong won the Annie M.G. Schmidt award, a prestigious award for the best theater song of the year, with "Voor Ik Vergeet," in the performance of Lenette van Dongen. He also wrote the title song to "Theo van Gogh"'s TV series Medea, and completed a radio play titled Het Hoofd Van Ferdinand Cheval. In the spring of 2005, Spinvis toured Dutch theaters with his show Lotus Europa. The end of 2005 saw the release of his second album, Dagen Van Gras, Dagen Van Stro -- the title a reference to R.A. Lafferty's Days of Grass, Days of Straw. The album was more of band orientated record than its predecessor. By then Spinvis was somewhat of a hit, and TV and radio began airing his lead single "Ik Wil Alleen Maar Zwemmen" frequently. The full band even appeared on Top of the Pops, performing the song to a backing track. The summer of 2006 saw a small side step for De Jong and his band. They released Ja!, a collaboration album with beat poet Simon Vinkenoog. Spinvis and Vinkenoog also performed together at 2007's Parade, in Noga, a show written especially for the travelling festival. Their performance of Kathleen Raine's poem "Introspection" was one of the highlights of the year. In January 2007, Spinvis was awarded the Popprijs, an annual award given to the Dutch artist with the most valuable contribution to Dutch pop music. Spinvis capitalized on his success by releasing a third album, Goochelaars & Geesten, in the fall of 2007. Goochelaars & Geesten was a collection of B-sides, live tracks and leftovers from the period 2002-2007 (the first edition came with a bonus disc containing music De Jong had written for the Belgium movie A Perfect Match). The song "Wespen Op De Appeltaart," written by De Jong for a psychiatric hospital in Belgium, became somewhat of a YouTube hit. The rest of 2007 was spent performing a theater tour for Op Een Avond In Het Heelal. ~ Philip D. Huff, Rovi