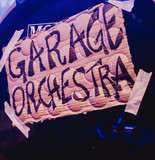 GARAGE ORCHESTRA is an Italian alternative rock band formed in Milan in 2010. Their sound is a mix between indie rock/dance rock rhytms, rock’n’roll positive vibes, punk-rock energy and 90’s pop-punk melodies, as well as a folk attitude in their acoustic shows.   Over the years, Garage Orchestra has played over 200 concerts between Italy and Europe, released 1 album, 3 EP, 2 singles and 2 acoustic cover songs for charity projects. The band is currently in studio for the recording of the new album.   In 2011 they release their first album, "The Decision of Don Rodrigo" including the singles “End of Lightyear”, "Heroes and Villains" and “Energy”, which brings the band as guest in TV shows such as Database (Rock TV), London Live (Raidue), radio shows and an appareance at the Venice Movie Festival.  In 2013 Garage Orchestra release the acoustic ep #BONUS. They also record two songs for the charity project “Punk goes acoustic” founded by Andrea Rock: a cover of “Welcome to Paradise” by Green Day and a medley by Rancid. In 2014 the band invent the "songs in 15 seconds": cover of famous songs performed in 15 seconds, well received by the audience and shared by the Radio show "Tropical Pizza" on Radio Deejay.  In 2015 they release the EP "PLAZA", which contains acoustic, pop and folk influences. The same year they announce a long hiatus that will last until 2017. The band reunites in 2017 with a new line up and release two new singles: “Waste No More” and “Horizon” in 2019.