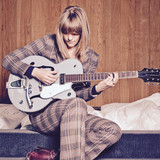 Milla Kay sings, writes, composes and produces. She understands and appreciates both stage and studio – the big picture and the fine detail – and knows how to balance her own projects with supporting the creative vision of others. Growing up in a small village on the Baltic Sea, she discovered her own creativity early and composed pieces on the home organ already at the age of nine. Soon after, she took up the guitar and writes and performs on it to this day. After initially studying interior design, she took the plunge and moved to Hamburg in 2001 to make music her profession. Recorded in London and Hamburg respectively, her albums Out Of Place (Rhythm Attack, 2007) and Heartmade (edel:Kultur, 2012) have received wide acclaim in the press and formed the central focus of tours and festival appearances. Parallel to composition and project management training at the “Deutsche Pop” Academy, she worked as a composer for Warner Chappell Music. Today, she devotes her energy to writing and producing music in the realm of advertising and film, in tandem with composer Hauke Who (Die Tonpiloten). They founded the label One Track Pony in 2019 – a vehicle for their own releases as well as a creative space for collaborations with filmmakers and artists. Milla is currently working on an EP of her own material, due for release in 2022.