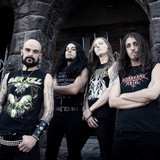 An uncompromising thrash metal outfit based out of San Francisco, Hatchet emerged at a time when classic Bay Area thrash was being eclipsed by technical death metal and post-hardcore. Citing influences like Megadeth, Slayer, and Overkill, the group forged a fiery sonic path that paired caustic riffs and relentless beats with the D.I.Y. punk ethic of their heroes, resulting in a record deal with Metal Blade. Debuting in 2008 with Awaiting Evil, the band went on to issue a string of well-received LPs like Dawn of the End (2013) and Dying to Exist (2018), cementing their reputation as leading lights in the New Wave of Bay Area Thrash movement. Formed in the mid-2000s around the talents of Eric Lundgren (vocals), Julz Ramos (guitar), Sterling Bailey (guitar), Ryan King (bass), and Alex Perez (drums), Hatchet first made a name for themselves with some high-profile shows in 2006 and 2007. An appearance on the Thrash Metal Warriors compilation led to a pair of big events, the first being an opening slot for the Possessed, and secondly a record deal with Metal Blade in 2008. Their acclaimed debut full-length, Awaiting Evil, followed shortly thereafter. They moved to the End for their sophomore effort, 2013's Dawn of the End, which showed some New Wave of British Heavy metal influence. 2015's Fear Beyond Lunacy, also released via the End, debuted a new lineup which featured co-founder Julz Ramos on guitar and vocals, guitarist Clayton Cagle, drummer Ben Smith, and bassist Devin Reiche. The band signed with Combat Records, a relaunched imprint operated by David Ellefson's EMP Label Group, in 2018 for their fourth studio long player, Dying to Exist. ~ James Christopher Monger, Rovi