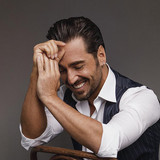 Known for his 2003 hit "Ademas de Ti" and for the theme song of Telemundo's popular telenovela Gitanas, David Bustamante is among the promising Latin pop singers who emerged in Spain in the early 2000s. Bustamante (who only uses his last name as a recording artist) has lived in that country his entire life, but he is not part of Spain's nuevo flamenco scene. The vocalist does, however, incorporate elements of Spanish flamenco and Spanish gypsy music at times -- and he has his share of Latin American influences as well, including Afro-Cuban salsa and Colombian cumbia. But Bustamante is not a flamenco, salsa, or cumbia artist in the strict sense -- his music is Latin pop first and foremost, and romantic pop ballads are one of his strong points. Some of Bustamante's admirers have described him as a Spanish equivalent of Ricky Martin or salsa romantica star Marc Anthony -- both of whom are, to a degree, valid comparisons, although Bustamante has a recognizable style of his own and sings with a distinctively Spanish accent. Because of the way he pronounces certain words, anyone who speaks Spanish will be able to tell that Bustamante is from Spain instead of Latin America. Bustamante was born in San Vicente de la Barquera, Spain, on May 25, 1982. The singer was in his late teens when he became the third finalist in Spain's Operación Triunfo España contest. Bustamante went on to sign with Vale Music Spain and Universal Music Latino; his debut album, Bustamante, was released in Spain, Latin America, and the United States in 2003 and became a big seller, thanks in part to the single "Ademas de Ti." Another highlight of that album is "Perdóname," a duet with Puerto Rican pop star Luis Fonsi. In 2004, Bustamante followed up his first album with his sophomore outing, Así Soy Yo (That's the Way I Am), which was -- for the most part -- produced by the well-known Emilio Estefan in Miami. It was also in 2004 that Bustamante recorded the intoxicating theme song of Gitanas, a superb, highly thought-provoking telenovela that was filmed in Mexico and ran on the Telemundo network in the United States. Set in a fictional Mexican fishing village called Malurribo, Gitanas dealt with the cultural differences between gypsies and non-gypsies -- and all hell broke loose when a young gypsy woman named Maria Salome (played by Ana de la Reguera) fell madly in love with a gayo (male non-gypsy) named Sebastian Dominguez (played by Manolo Cardona). Ultimately, Gitanas took on a larger meaning than gypsies and non-gypsies; the telenovela was really a commentary on prejudice in general, and its overriding theme was best summed up by Cardona's assertion that "Al fondo, todos somos gitanos" -- deep down inside, we're all gypsies. Although the Gitanas theme (which was written and produced by Jorge Avendaño Luhrs) wasn't included on initial pressings of Así Soy Yo, Universal later added it as a bonus track. Bustamante's success continued with Pentimento (2006), Al Filo de la Irrealidad (2008), and A Contracorriente (2010) all reaching the top of the Spanish charts and going platinum. 2011's Mio, produced by Christian Leuzzi, peaked at number four in Spain, also reaching platinum status, helping the singer's total sales figures approach the two million mark. He followed it with two more number ones, Vivir (2015) and Amor de los Dos (2016), the latter of which featured guest appearances by singers Alejandro Fernández, Edith Márquez, and Alicia Villareal. ~ Alex Henderson, Rovi