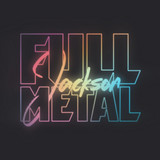 FULLMETAL JACKSON are an indie-pop duo consisting of german producer Roland Rockatansky (as ROLLY ROCKET) and french singer Thomas Cadet (as SHENWALKER). Growing up in a world, orchestrated by epic cyberpunk science fiction, blasting real hero action movies and catchy pop and rock cult classics in the 80s and 90s, Rolly & Shen are inspired by their childhood memories as well as their own life experiences and spiritual beliefs. They write atmospheric modern music, filled with the cosmic sound of synthesizers, electric guitars as well as appealing healing frequency vocals from outta space. All this they mash up with surreal art, a fictional storytelling about events from parallel dimensions, and a good pinch of nostalgia to create an inspirational and motivational fullmetal experience for humanity. Rolly & Shen first collaborated on their single Savage World in 2018, following by a bunch of re-imagined cult songs, such as the legendary covers of Hotel California feat. ULTRABOSS or Neverending Story feat. SURA. In 2021 their experiences and feelings finally culminated in the ultimate long-distance band project FULLMETAL JACKSON. They successfully work together online from 9000 km distance and now realized their first ever music video for the first single of their debut EP F4K3, which will be released on DECEMBER 12th 2021.