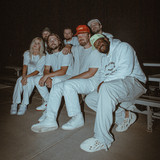 River Valley Worship is a faith-filled collection of artists based out of River Valley Church, an inspirational and vibrant church with locations all around the greater Minneapolis region. Beginning in 2011, the group began releasing a mix of uplifting studio and live albums that exemplify the unified worship culture flourishing within their weekend services. Led by singer, songwriter, and worship pastor Ryan Williams, the band's music is artful, hope-filled, and seeks to pioneer new sonic landscapes for the Church on both the local and global level. The band's 2018 release of Million Lifetimes was their first record under BEC Recordings, which included Christian Billboard Top 25 anthem "Hope Has A Name." Shortly after, the team retreated back to the studio to write a live record Altars, which released in 2020. Their newest single "Nore More Than Ever," dropped early in 2021.