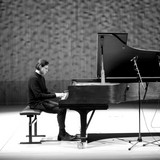 Born in Munich in 1990, Lorenz Kellhuber started his classical piano studies at the young age of five. At eight years old, he played his first concert and started to write his own compositions. Aged eleven, he became a Jungstudent at the College of Catholic Church Music & Musical Education in Regensburg. Later on he received lessons by Prof. Franz Massinger, a student of Arturo Benedetti Michelangeli, and was discovered by pianist Rob Bargad (Nat Adderley Quintet), who introduced him extensively to jazz stylistics. At the age of only sixteen, Lorenz passed the exam for the highly gifted and became a student at Berlin Jazz Institute, where Kurt Rosenwinkel, Hubert Nuss, Greg Cohen and John Hollenbeck were among his teachers. During his frequent New York visits, he also received lessons from Fred Hersch and Sophia Rosoff. In 2010, he was one of the youngest graduates worldwide to complete his Bachelor of Arts degree. In the Summer of 2014, he became the first German musician to receive first place in the renowned Parmigiani Montreux Jazz Piano Solo Competition from Monty Alexander. In 2016, Lorenz was nominated for the ECHO Jazz as “Newcomer of the Year”, in 2018 he was among the ten “new key players” of the German music magazine “Jazz thing”.On October 29th, 2021 his second solo album "Contemporary Chamber Music" will be released.