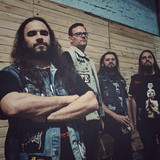 Harmony never was the mankind strong suit. Socials inequalities, wars, exploitation and lack of empathy aways been present in our society. And this filthy side of the world reflects itself in the music. Case in point is the band Harmony Fault, from the south of Brazil, a bastard spawn of this roughness, sonicaly and mundane. Grouped since 2002, the quartet adopts as genre a goregrind stained by the blood of death metal, the guts from splatter and even some addictions from more traditional rock shaped for extreme music. During eighteen years wandering the bowels of civilization, the group released 10 records. There were EPs, splits, compilations and two full lengths — Rotting Flesh Good Meal (2011) and Savage Horror Dementia (2014). They also shared the stage with others infamous names that impregnates the globe with quality noise, like Gutalax, Stoma, Rot, Agathocles, Pulmonary Fibrosis, Riistetyt and Dead Infection. (de)Formed nowadays by Calebe (drums), Guilherme (grunts), Pulga (guitar) and Monteiro (bass), HxFx now prepare a new onslaught against sensitive ears: a third full album.