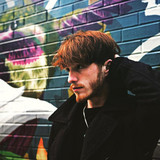 Andrew Leasure, also known as “Avolo”, is a 20 year old DJ and producer from Columbus, Ohio. He is mainly influenced by Seven Lions, Dillon Francis, and Skrillex.  He wants to make an impact on the electronic scene with his new, creative melodic dubstep. He wants people to love hard when listening to his music. He would love to become a production teacher, and eventually create a music festival based off melodic and heavy bass music.  When not creating music, Avolo likes to read, spend time on his fitness, and relax with friends and family.