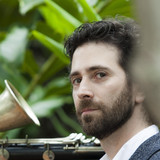 Described as "ebullient" by New York Times and "composer of eminent individuality" by Yusef Lateef, voted #1 Rising Star Clarinetist in DownBeat Magazine's Critics Poll. Etkin's duo concert with Sullivan Fortner in Paris was chosen in the Top 6 Musical Highlights of the year by Liberation: "a concert of weightlessness, class, spark, inspiration and sharing. Magic uninterrupted for two hours. The crowd... went wild. For such is the music of Etkin: sensitive to the exchange with the audience." Etkin's unique sound on the clarinet, bass-clarinet & saxophone emanates from an openness to deep connections that transcend cultural & generational boundaries. He began reimagining how touring can be part of the creative process with Gathering Light: Flipping the record-then-tour model, he first toured in Asia, Africa & Middle East, then let the rhythms & melodies he encountered influence the music he created with his New York band (Nasheet Waits, Ben Allison, Curtis Fowlkes, Lionel Loueke). In April 2020 he launches the Open Arms Project: a monthly series of singles + music videos recorded & filmed around the world with master musicians in Brazil, France, Zimbabwe, Czech Republic & more. Etkin feels a responsibility to continue passing the rich musical traditions of this world to the next generation. His Timbalooloo program created a paradigm shift in how children are introduced to music, as can be heard on

Wake up Clarinet! & Finding Friends Far from Home: a Journey with Clara Net.