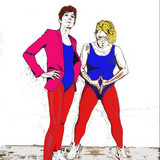 The Noise &amp; the Naive

A ”21st century testosterone-free version of Iggy and the Stooges.” Tom Robinson, BBC Radio 6. French punk-pop duo formed in the UK in 2017. Now based in Montreal, Quebec! With acknowledged influences that include Shonen Knife, Yeah Yeah Yeahs and White Stripes, Anne (drums, lead vocals) and Pauline (guitar, backing vocals) have forged their own unique take on the Riot grrrl aesthetic and gained a reputation for fire-cracking live sets that has led to gig invitations from events such as Hit The North, This is Tomorrow and Loud Women.