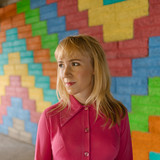 Leila Jane is a Dublin based recording artist with roots in London and Donegal. While possessing a voice that has been described as ‘’somewhere between Janis Joplin and Sandy Denny,’’ her music is an interpretation of the surreal paradoxical reality that the haunted soul often finds itself in. The raw and honest expression found in her work is a testament to her affinity with blues music. Leila Jane’s single releases got air time on the Late Date show on RTE Radio One and was added to Glastonbury’s Spotify playlist of 2019 performers. After spinning her tune ‘Look So Sweet’ Cathal Murray (RTE1) described Leila Jane as ‘’one to watch’’.

‘Little Lady Blues’ received radio play on Dublin City FM and 98FM and was hailed by Remy Connolly of REMI: “The most rewarding aspects of her single reside in its raw power and the unfiltered self-awareness of the song-writing.”