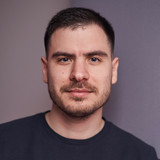 Rodion Gordin is a radio dj that later on started to make his own music and became one of the most notable commercial dance music producers in Latvia. His tracks played by all major radio stations in the country and featured such names as Markus Riva, Normunds Rutulis, Antra Stafecka, Adriana Miglane, Normunds Paunins, Rassell, Dvines and many others. His first single “Love Me Right” was released on Kontor and became one of the biggest dance music recordings in 2014. He was one of the first djs from Latvia to enter first round ballot for Grammy nomination with his song “Crashing Down” released on Mic Rec. His collaboration with Markus Riva "With You" aired on MTV. In 2018 he became an official dj for one of the top nightclubs in Baltics “Coyote Fly”. Rodion played as an opening act for Filatov & Karas, Madison Mars, EDX, Willy Williams, Tom Novy, DJ Smash and many more. Also been choosen by brands such as Reserved, Gumball 2000, EHR, Riga Fashion Week and many others to play their official parties in Riga. Rodion Gordin is working on to bring quality music to his listeners with finest singers and songwriters from Latvia and around the world.