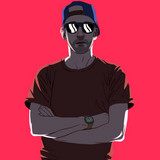 Sonny Denja is an Italian dj and producer based in Milan He has released tracks, remixes and collaborations with a lot of producers, such as Walshy Fire (from Major Lazer), Tommie Sunshine and more. With his unique DENJADRUM sound, which is a fusion of tropical elements with electronic dance music, he has received support from a lot of djs including Diplo, Tommie Sunshine, Joachim Garraud, Noise Cans. His music has also been broadcast on major Italian radio stations, such as Radio Deejay, Radio 105, Radio M2O and on the British BBC Radio 1. In 2019 he was one of the Italian finalists of Red Bull 3Style competition