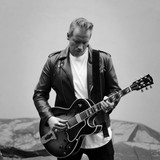 Tommy Kristiansen is a guitarist, singer and a songwriter. From the age of 14, he has played live and toured worldwide with many different artists and bands in addition to playing on albums and tv-shows such as The Norwegian Idol. After finishing school in 2004, he started playing with the Norwegian Grammy winning artist Magnet ( Even Johansen ) in 2005, for the launch tour of his album The Tourniquet. He then stayed in Magnets band for 3 years. In 2007 he joined the famous duo Madcon on the road promoting their hit single "Beggin", and they have been touring all over the world since, played sold out stadiums and arenas. Tommy also toured for several years with Norwegian band Beady Belle, starting in 2008 after the release of Belvedere.

Tommy played on Marit Larsen's album "Spark" (2011) and went on tour with her in Norway and the rest of Europe for 6 months. For 10 years Tommy has been on the road with Norwegian Idol winner (2003) and World Idol winner Kurt Nilsen. He's been lucky to do several tours and albums with Kurt. He has also toured live with Norwegian EDM artist Alan Walker since 2017, and played guitars on his album «Different World» (2018), including hits like «Alone» and «All Falls’s Down» feat. Noah Cyrus. Tommy Kristiansen´s debutalbum, "Divided" was released March 11th 2016. The first single «I Met Someone» from his coming album was released April 5’th 2019. October 4’th, Tommy is releasing his next single called «Your Pick Me Up».