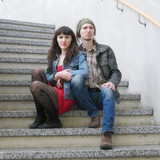 They met via music-forum while searching for band members. Although there where several other persons who where showing interest, only two people showed up to the local rehearsal studio. After several years of just jamming together, they decided that instead of a full band they will form a duo - and so the name "Toonelised" rise up. Toonelised - plural of Tooneline. Toone is

an old name for the underground world in Estonian mythology. And the grey bird living in swamps represented the connector between the living and the dead. And with a slight grammatical twist to the noun itself a name "Toonelised" was created. In spring 2018, they visited Dublin and while being there, they also went to the Westland Studios in order to record some songs. Currently they are