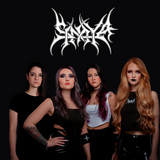 Founded in 2010 in the city of São Paulo – Brazil, Sinaya is currently the first Deathcore band in the world formed only by women. Over a career that spans more than 10 years, the band has released an EP – ”Obscure Raids”, three singles and two studio albums – the first, ”Maze Of Madness” (2018) produced by Marcello Pompeu (Korzus); and the other one, produced by Thiago Bianchi (Noturnall, ex-Shaman), who has worked with relevant names in both national and international Metal scene, such as Mike Portnoy, Aquiles Priester, Edu Falaschi and James Labrie. The album’s release is scheduled for 2022. The band also has an extensive concert list, having toured South America and Europe – traveling through more than 10 countries and more than 30 cities – in addition to having played Metal Festivals in Switzerland, Brazil and Peru, and sharing the stage with big bands such as Suffocation, Exodus, Abbath, Primal Fear, Amon Amarth, Pyrexia, Pathology, Vader, among others.