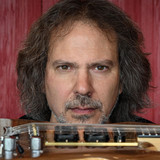 Dave Isaacs has been called “a musician’s musician”, a master player with the command and knowledge of his instrument that can only come from a lifetime of experience. In his adopted hometown of Music City USA he has become known in the music community as the “Nashville Guitar Guru” for his work as a teacher and coach to professional performers, hit songwriters, and the next generation of Nashville’s rising stars. Nashville might seem to be an unusual place to land for a classically-trained graduate of the Manhattan School of Music, where as a student he won the Rose Augustine Award for promising young classical guitarists twice. But Dave Isaacs is about as diverse as a musician can be. After a serious repetitive strain injury derailed a classical concert career, he started writing songs. Over 12 albums and nearly 25 years, he has explored a stylistic range from literate singer-songwriter folk to foot-stomping swamp blues, soaring harmony-driven country-rock, and jazz- inflected instrumental excursions. He has rocked a muddy crowd at Woodstock and played the blues with Les Paul, and added “author” to his resume in 2019 with the publication of his book "The Perpetual Beginner".