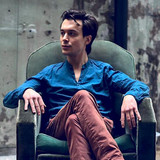 For ten years now, Guilhem Flouzat has been following his own compass on the european and American scene, being a sideman for Youn Sun Nah, Camila Meza and Seamus Blake among others. His debut album, “One Way…Or Another”, hailed as “the best thing to happen to French Jazz in a long time” by journalist Vincent Bessières, saw him play duo with Tigran Hamasyan. He joined the Sunnyside label for his sophomore effort “Portraits”, a series of musical depictions of the eight musicians on the album, amongst whom Becca Stevens and Ben Wendel. “A Thing Called Joe”, a trio offering delving into tin pan alley repertoire was praised as a “classic” by French and American reviews, and followed by several tours with Sullivan Fortner. The same year the collaborative effort “Constant Stranger” was released on Fresh Sound/New Talent featuring Richard Sears on piano and Martin Nevin on bass, reminiscent of Ellington and Scriabine.   His first full album as a songwriter featuring Isabel Sorling, “Turn The Sun To Green” will be released on Shed Music on 02.21.2021, a series of tunes imagined late at night on his neighbor’s piano in Washington Heights, just before returning to Paris.