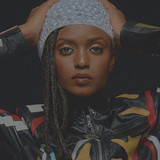 Kelela synthesizes contemporary R&B and progressive electronic music with an aptitude for prompting club play as much as bedroom listening. The vocalist and songwriter, born Kelela Mizanekristos in Washington, D.C., was raised in suburban Maryland and didn't have aspirations as a singer until she started studying jazz. Subsequent obsessions with Amel Larrieux and Little Dragon helped push her toward finding her own style -- one she found after she moved to Los Angeles in 2010. She connected with Teengirl Fantasy and contributed to the duo's Tracer album on the song "EFX." This led to meeting the Fade to Mind label's Prince William, who exposed her to his associates' lean yet sharp and deep productions. Knocked out by what she heard, she soon debuted on Kingdom's August 2013 single "Bank Head." A couple months later, guided by the intent to put together a mixtape that sounded like a remix collection, she released the free download Cut 4 Me with contributions from Kingdom and peers Bok Bok, Girl Unit, Jam City, and Nguzunguzu. One of the year's more striking debuts, it wasn't available on any physical formats until April 2015, when Night Slugs released a two-CD edition that added actual remixes. Between the digital and physical releases of Cut 4 Me, Kelela was featured on an array of tracks, including Bok Bok's "Melba's Call," a pair of highlights off Kindness' Otherness, and Future Brown's "Danger Zone," after which she joined the latter group on the Warp roster. Her first work for the revered U.K. label was the six-track Hallucinogen EP. Conceptually focused on the beginning, middle, and end of a relationship in reverse order, the October 2015 release involved input from some of Kelela's previous partners, as well as the likes of Arca, Obey City, and Ariel Rechtshaid. Across the following year and into early 2017, Kelela extended her reach by appearing on Clams Casino's 32 Levels, Danny Brown's Atrocity Exhibition, Solange's A Seat at the Table, and Gorillaz's Human. Preceded by the Jam City collaborations "LMK" and "Frontline," her first proper album, Take Me Apart, was released by Warp in October 2017, followed by a set of remixes 2018. ~ Andy Kellman, Rovi