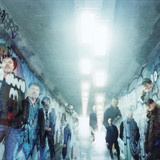 The Levellers formed in Brighton, England in 1988. Mark Chadwick, Alan Miles, Jeremy Cunningham, Charlie Heather and Jon Sevink forged an alternative, punk-folk-rock sound – releasing their debut album ‘A Weapon Called the Word’, in 1990. After Simon Friend replaced Miles, the platinum selling ‘Levelling the Land’ was released in 1991 and its follow up, ‘Levellers’ entered the UK charts at No 2 in 1993. ‘Zeitgeist’ followed in 1995, going on to become the band’s first and only number one album. 1997s ‘Mouth to Mouth’, provided them with their biggest hit to date in “What A Beautiful Day” and the more experimental ‘Hello Pig’, their last on China Records was released in 2000. The Levellers first release via their own "On The Fiddle Recordings" label was the idiosyncratically political ‘Letters From the Underground’ in 2008 -

it was their most successful album in a decade.