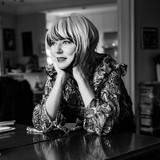 Born and raised in Manhattan, Esther Crow is an award-winning singer, songwriter and teacher. She is the cofounder of The Electric Mess, a garage-punk band formed in 2007 (which has recorded 5 albums, and toured throughout the U.S., and Europe) and the founder of Thunder & Sunshine, a rock band for kids formed in 2017. She started writing music for kids after the birth of her son, Vincent Crow (now 7), in 2013. Thunder & Sunshine, a 6 piece band with 3 female singers, released an album in 2017, which received an Award of Excellence from the Film Advisory Board. One song off the album, Monster in the Closet, was a semi-finalist in the International Songwriting Competition in 2020. Venues they have played include: Joe's Pub (twice), Union Square's City Summer in the Square (twice), Governors Island, McCarren Park, Hippo Playground, Carl Schurz Park, Monty Hall, NJ, a live broadcast on WFMU's show, Double Dip Recess, and the Colony Club in Woodstock, NY. She is releasing her first solo album for kids, All Together Now, produced by Grammy-award winner Dean Jones, on June 25th, 2021. Her first single, It's so Easy Being Green was released on Earth Day, April 22nd, 2021. For more info, go to: https://esthercrow.com