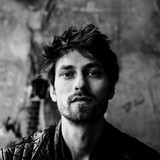 IAN LATE stands for timeless and catchy indie pop. In 2018 the Berlin singer-songwriter released his debut album CHOICES which was written and produced with his band, mostly in country houses far away from the fast-paced and restless metropolis. The nine songs on it are like balm on the soul, let you pause and hover. They impress with depth and stylistic multifacetedness: from driving and danceable Brit sounds over melancholic floating ballads to shimmering 80s wave sounds - always dressed in strong, hopeful pop melodies. Spherical, radiant and distinctive guitar sounds, melodic bass runs and crisp drum beats determine the sound of the album. IAN LATE’s striking voice does its part to bring the words to the listener both emotionally and vividly. He sings about life in a big city like Berlin, about the uprooting, blindness and greed of the western meritocracy. But the album is as much about personal relationships and their difficulties, about loss, letting go and new beginnings, as well as dealing with your inner self. With ever new material in its baggage, IAN LATE has toured in recent years both inside and outside Europe, such as in Nashville, New York City, Shanghai and Taipei. Moreover he has also been active as a street musician and has been writing and singing for DJs and producers of the EDM genre, reaching a top 10 dance charts placement with the single "Hey Girl" (2014) - a collaboration with DJ Pretty Pink.