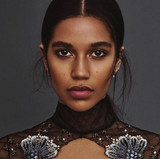 Fashion model, singer, songwriter, actress and dancer Alana Monteiro was born on March 13, 1997 in Massachusetts. Growing up, she was heavily involved in the performing arts, dancing for 15 years, singing and doing theater. At the age of 18, she moved to New York City to begin modeling full-time professionally. Alana is represented by one of the biggest and most successful modeling agencies in the world; Wilhelmina Models.   Alana has landed covers and spreads in the some of world's top high fashion magazines including Vogue, Harper's Bazaar, Elle, Marie Claire, L'Officiel, Numéro, Glamour, Grazia and many more. Alana has also worked for some of the world’s most globally-known brands such as such as CoverGirl, bare Minerals, Clinique, L'Oréal Paris, MAC Cosmetics, NARS, Nike, Under Armour, Footlocker, Gap, Macy's, Puma, Fila etc.   A multi-talented, creative and well-rounded artist, Monteiro also writes and sings her own music. She has been singing and song-writing since her childhood for fun, but only started to pursue her music career professionally when she was discovered by a music producer via posting a video of her singing to her Instagram page. The music producer brought her to her first professional recording session where she made her first single titled "High" which was released on June 30th, 2021.